York Co. Man In Jail After Dragging His Young Son By The Hair 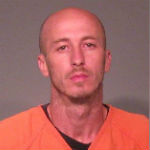 YORK COUNTY, S.C. — A York County man is in jail Saturday night after police said he assaulted his son.

Police said Lemuel Ballard, 36, beat his 10-year-old son in the chest with a belt and dragged him across the floor by his hair.

They said the beating left black bruises on the boy.

Ballard asked a judge if he’d still have to pay child support while in jail.  The judge suggested he would have to take that up with another judge.

Ballard has been charged with unlawful conduct towards a child.